Every once in awhile we like to find creative ways to spend time with our fellow Bravo team members outside of the office, which is why Stephen Stuesser, Mona Moreno and I traded in our typical business attire for workout clothes and black lights and ran in the Foam Glow 5K here in Austin this past weekend! Our clean clothes didn’t last long after running through several Glow Zones and getting sprayed with neon foam throughout the three-mile course. We didn’t set any land speed records, but good times were definitely had by all. How’s that for team bonding? 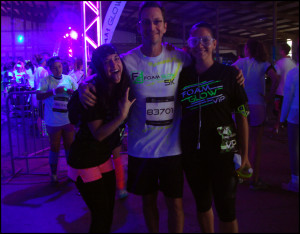 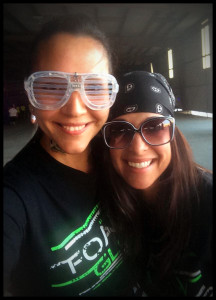 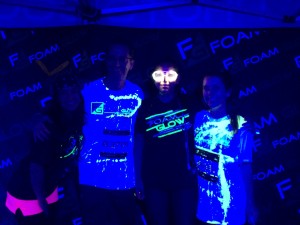 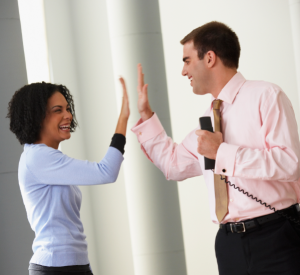 You’ve been working hard…. And you deserve to be rewarded for your efforts!

That’s why for every application you submit during the month of February, Bravo will give you a high five (5 extra points) if it funds. That’s 10 + 5 for a total of 15 points, and there is no limit on how many applications you can submit… We have plenty of high fives to give out!

Now that’s something to celebrate!

(To get your high fives, the application must be received in the month of February 2015 and fund by March 31, 2015. Remember, an application is defined as a credit request for up to $100,000 in equipment financing and standard Bravo lease rate factors must apply. Bravo also reserves the right to accept or reject any application.)

We are pleased to announce that Bravo Capital is now a proud member of Austin Gives! Aligned with our own philosophy of helping business owners achieve their goals, Austin Gives recognizes businesses in the Austin area that make supporting the community a top priority. Bravo is thrilled to be part of an organization that values philanthropy and supporting our city as much as we do.

As pictured below (with Ray Benson!), our own Marketing Manager, Laura Stuesser, attended Austin Gives’ 2015 GeneroCity Awards Luncheon, one of many events throughout the year that recognizes members’ charitable efforts. We at Bravo are looking forward to further impacting our community through Austin Gives! 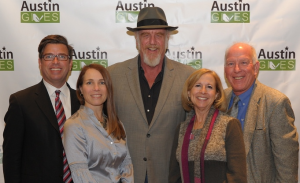 The first edition of NAELB’s Leasing Logic had a double dose of Bravo, as our own Leslie Brown had not one but TWO articles in the newsletter! Read on to learn about Leslie’s top 5 ways to gain leads from peers in 2015. (And be sure to sign up for Leasing Logic to read Leslie’s future article’s here!)

Many of us spend a large amount of time and money trying to market to potential customers. Our end goal is to bring as many clients to the table as possible. Business owners are the target customers for most brokers, while funding sources consider brokers as their customers. Whichever it may be, there is another way to capture potential customer business, and that is through peer referrals. Your associates are spending as much time as you are seeking out potential clients. They are bound to have just as many that don’t fit their niche as you do. Are you one of the people your peers are sending referrals to?

1. Know your comrades’ niches.
Sounds simple. Try putting it into action. Many of us have hundreds, if not thousands, of contacts in the financing industry. Narrow down your list and begin making calls. Take notes and keep a comprehensive database that contains details on who does what, and where. Figure out how you can complement their products with your services. Establish a mutualistic relationship. This is a new way of thinking. Don’t try to educate them only on what deals they can send to you. Have a genuine interest in what leads may be a good fit for them too.

2. Update and follow up… on everything.
If you’ve had a customer referred to you, it’s likely because someone trusts you. They trust you to work the lead and to continue following up on it. Let them know the status. Don’t forget to send that final follow up “thank you,” to both your affiliate and the customer. After all, shouldn’t that be the cherry on top of the proverbial funded-deal sundae? A “thank you” goes a long way.

3. Be active in your community, both where you live and where you work.
Establish a good reputation on all fronts. Gaining leads from peers means having peers. The best way to do that is to connect with others of like-mind and attitude. There’s no better way to do that than to give something back to the communities you both thrive in.

4. Be prepared to have answers.
You may know your product line like the back of your hand, but do you know other options as thoroughly? Are you able to pinpoint a need and direct the customer (and your associate) to the most efficient resolution?   Even if that doesn’t mean funding with you now, knowing a solution can mean a funded deal later. Know of other options that may provide a better solution. Be creative and work toward more than the bare minimum of getting a transaction funded. Your partners will recognize that and provide you more first looks.

5. Establish a process for excellent customer service.
A lead today may still be a customer for the originator tomorrow, and that’s okay! If you’re fielding a referral, remember that you’re acting as an extension of your affiliate. Whether you provide long term service or a temporary answer, your attitude and actions will reflect on the originator and will go a long way to secure more leads — or ensure you never get one again.

I had several referrals in 2014 and as I reflected on my 2015 goals, I knew that continuing my relationship with my partners across the nation was top priority. There are several benefits for behaving professionally and one of the important benefits is referrals. Referrals are inherently more satisfying because they come with a sense of accomplishment and pride, in that someone decided you were the one who could be trusted to help. If you will incorporate the above regularly, you will find that the future will be even more prosperous for you and your peers.

New Year’s resolutions were very popular in the 20th century, but it seems that once everyone had their fun partying like it was 1999, we all moved past the idea that improvement upon oneself happens only once a year. It’s hard though, not to think and review, when the calendar offers such a convenient beginning and end, such as the one on New Year’s Eve. We at BRAVO Capital did a little reflecting and found that there were a few things we appreciated about the past year and could improve upon in 2015.

Stephen and Laura Stuesser, President and Marketing Manager of BRAVO, promise to remember names! It’s true… in the past they may have remembered your face, but it’s highly likely that they may not have remembered your name. We’re all glad to know that as we pass them in the hallway in 2015, they’ll know just who it is they are high fiving.

Narda Hernandez, our Credit Analyst, remembers how in the past, New Year’s resolutions provided a guide for her throughout the year. Being young, she recalls, typically means you want to do it all or have no clue whatsoever what you want. Resolutions were an easy way of combating that. Now that she’s older, she knows what she needs to do and pursues her goals daily.

Mona Moreno, our Analyst, tried to trick us all by saying that her resolution was to read every book she could get her hands on in 2015. Little did we know that there was a marriage proposal in the works for her, and as she stood on the stage at ACL Live in front of thousands of people, while her fiancé got down on bended knee, her old resolution hit the road and a new resolution made itself known. Operation Body Transformation has now commenced! On her big day she’ll be walking down aisle fit as a fiddle. Her fiancé’s new resolution, as he recently discovered, is to be the emotional support person for Operation Body Transformation.

Martin Lacayo, VP and Fund Manager for BRAVO, says his resolution for the New Year is to see the cup as half full. As anyone knows, leasing is a great and illustrious industry but not without its challenges. Martin promises to see every challenge as an opportunity and not a stopping point. I can personally attest to this on his behalf. Last year I was out trotting circles around Martin on Town Lake during a good 3 mile hike. Now I can’t keep up with him on my best day. I think his resolution of seeing challenge as an opportunity really began in 2014 and is going to carry over gracefully in 2015.

Finally, I – Leslie Brown, VP and Fund Manager for BRAVO Capital, do solemnly swear that I’m not so eager to take on a resolution. Don’t get me wrong. I think they’re great! Still, this year I have a deep desire to adopt a revolution. Yes – I craftily switched my ‘S’ with a ‘V’. A resolution seems so mild and conforming, while a revolution is more my style. I look forward to adopting an added positive and proactive way of thinking. After all, that’s what a revolution is. It’s an instance of evolving; an overthrow of an old way of thinking for a new. I also fervently vow to beat Mona and Stephen on floor planks this year, by staying in plank position the longest, with perfect form and without breaking a sweat. Let the games begin!

Another issue of NAELB‘s Leasing Logic, another great article written by Leslie Brown!

In this issue, Leslie discusses the importance of not only being a member of NAELB, but also the importance of members investing more time and effort than the bare minimum in the organization. Only when members come together and form a community with the intentions of improvement and growth can NAELB reach its true potential.

These ideas and more can be found in the full version of Leslie’s article. Read it here!

We are always proud to see a Bravo team member’s name in print! In the latest edition of NAELB’s Leasing Logic newsletter, Bravo’s own Leslie Brown interviews Dick Clark, President of Dick Clark Associates based out of New Philadelphia, Ohio.

To learn about how Dick started in the leasing industry, his thoughts on how it has changed over the years and his advice to new brokers, read the Q&A.

I know I speak on behalf of the entire Bravo team when I say we had a great time at the ELFA Forum in Fort Worth this past week! During this event – the premier legal forum servicing the leasing industry – we got caught up on new national and international laws affecting the industry, discussed processes with our leasing peers from all over the nation, and we even had the opportunity to share our knowledge and experiences with professionals who are newer to the industry.

After three days of networking with other leasing professionals, we are excited to implement what we’ve learned into our current practices. Never stop learning and never stop improving! 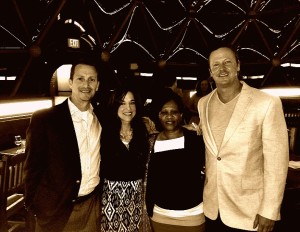